Citizenship in Syria and Iraq after 2011: Neo-Sectarianism or “Citizenship of Want”?

Both Syria and Iraq have experienced partial state disintegration over the last two decades. Power is not only contested between regimes and their opponents, but also by various sectarian actors united only in their opposition to incumbent regimes. At first glance this seems to suggest that decades of independent statehood have not sufficed to bond Syrians and Iraqis together as citizens, but rather that sectarian and other sub-state identities reign supreme and can be instrumentalised to feed violent conflicts. “Sectarianism” is an Ottoman legacy that was prolonged and expanded by the colonial regimes. After independence both Syria and Iraq came to be ruled by regimes dominated by a single sectarian group (Alawis in Syria, Sunni Arab Muslims in Iraq). Sectarian conflicts are by no means limited to Syria and Iraq, but manifest problems in almost all states of the Middle East; reference will thus be made to other states where appropriate.

The central question is whether sectarianism – or rather, sectarian violence – is the outcome of societal upheaval in times of crisis or a historically grown phenomenon that can only be controlled by authoritarian regimes. A historical analysis would suggest the former as an answer; one might observe a non-politicised “everyday citizenship” involving citizens of diverse ethno-religious backgrounds in all Middle Eastern states. Rather than “popular sectarianism” it is the subversive actions of various stakeholders – indigenous as well as exogenous – that foment said violence. Furthermore, there is evidence that the increasingly exclusive regimes in both countries have produced a new social alliance between the traditional “poor” and the excluded middle classes, thus creating a new alliance that is seemingly capable of and willing to challenge the sectarian syndrome. 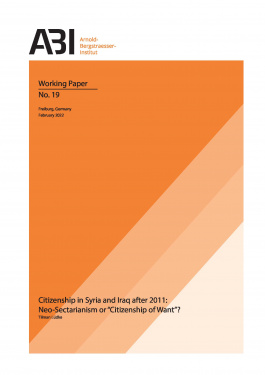