Selective Security: The Coloniality of State Power in the War on Drugs

Jenss, Dr. Alke
Kurze Beschreibung / Abstract:
Paramilitaries, crime, and tens of thousands of disappeared persons—the so-called war on drugs has perpetuated violence in Latin America, at times precisely in regions of economic growth. Legal and illegal economy are difficult to distinguish. A failure of state institutions to provide security for its citizens does not sufficiently explain this.

Selective Security in the War on Drugs analyzes authoritarian neoliberalism in the war on drugs in Colombia and Mexico. It interprets the “security projects” of the 2000s—when the security provided by the state became ever more selective—as embedded in processes of land appropriation, transformed property relations, and global capital accumulation. By zooming in on security practices in Colombia and Mexico in that decade and juxtaposing the two contexts, this book offers a detailed analysis of the role of the state in violence. To what extent and for whom do states produce order and disorder? Which social forces support and drive such state practices?

Expanding the literature on authoritarian neoliberalism and the coloniality of state power—thus linking political economy to postcolonial approaches—the book builds a theoretical lens to study state security practices. Different social groups, enjoying differentiated access to the state, influenced the state discourse on crime to very different extents. Security practices—which oscillated between dispersed organization by a multiplicity of actors and institutionalization with the military—materialized as horrific insecurity for social groups thought of as disposable. In tendency, putting security centerstage disabled dissent. The “security projects” exacerbated contradictions driven by a particular economic model and simultaneously criminalized precisely those that this model had already radically disadvantaged. 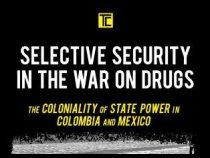