Mbororo under Attack: Extreme Speech and Violence in the Anglophone Conflict in Cameroon

Cameroon is currently affected by a violent conflict between military forces of the Biya regime and armed separatist groups that seek political independence for the country’s Anglophone minority in the North West and South West regions. While several reports have highlighted the perspectives of Anglophone civilians, this article adds an additional perspective by exploring the so-far underrepresented voices of members of the Mbororo ethnic minority who, individually and collectively, have been targeted by extreme speech and acts of violence by the separatist forces. The Mbororo are a pastoralist group that constitutes a minority in several African countries and is often said to stay out of formal politics. The role of Mbororo pastoralists in this conflict is of particular interest because of their ambivalent relationship with the Anglophone population that has been complicated by farmer-herder conflicts long before the current crisis. Drawing on both qualitative and quantitative data collected by our team between 2017 and 2021, this article pays special attention to the role of social media in the conflict dynamics and documents the extent to which the Mbororo have been affected by the Anglophone conflict. 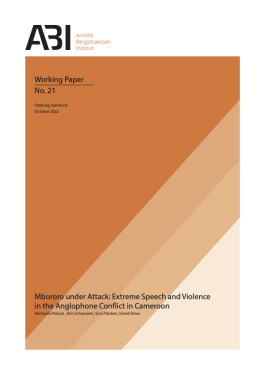