The Political Economy of Migration Governance in the Gambia

Migration is an important and contested societal issue in the Gambia, reflected in national politics. First and foremost, irregular migration is highly politically volatile. Many Gambians have left the country in the last decade, mainly in search of employment and learning opportunities in Europe. Many continue to do so, even after the political change. With migration towards Europe and staying there becoming increasingly difficult, the return of irregular migrants has become inevitable. However, returning too many too quickly will overburden the country’s struggling government, risking its political stability. Secondly, diaspora migration is increasingly becoming a central policy field. Through direct diaspora engagement in policies, their economic and political influence is set to continue increasing. The government should however be attentive to the various interests of different migrant groups, which is particularly difficult due to the politicized nature of irregular migration.

This, thirdly, relates to the uncertain legal status of the many Gambian asylum seekers abroad that have only limited chances of success. The primary reason for political asylum has become obsolete with the regime change. However, not all reasons for asylum are bygone, making a case-by-case review of asylum applications necessary to ensure conformity with international norms on refugee protection.

Fourthly, the Gambia has one of the highest immigration rates in West Africa, but this remains a politically relatively neutral topic, in all likelihood due to the ECOWAS freedom of movement protocols. Yet, the government could more actively support regional mobility, e.g. by streamlining the bureaucratic governance for immigrants, or by counteracting harassment at its borders.

Finally, concerning displaced people in the Gambia, progressive refugee protection laws and practices exist, including the right to work and opportunities for self-settlement. The protection of refugees is, however, not prioritized by the new government, probably due to the fact that the refugee population has greatly reduced in the last years.

1. Migration governance remains challenging due to the tricky balancing act between domestic (remittances from migration) and international interests (reducing migration).  Without a bold state-lead approach to steer migration, the government circumvents confrontation of both these interests. However, it also gradually loses credibility of its own rhetoric towards both sides. Implementing the new national migration policy offers the chance to exchange with the society more pro-actively on possibilities of governing migration. Essential is also what happens beyond the continent matters; only with more access to legal pathways, can the urge for irregular migration be reduced.

2. The political stakes of migration in the Gambia are high, especially when it comes to the return of rejected asylum seekers. Aiming at longer-term reintegration and development is a right step from an individual perspective, especially since irregular migration comes at grave humanitarian costs. Better reintegration programs do not make up for the political nature of return however, which is particularly evident for forced return. Large-scale return will risk the development and stability of the Gambia. Political interests from the Global North of reducing numbers of rejected asylum seekers should not prevail over achieving sustainable development.

3. The societal discourse around migration embraces the challenges implied in migration governance in the Gambia. The pull of Europe, tied to the strong tourism sector and long-established migrant networks, cannot be overestimated. This makes categories of regular and irregular migrants as well as asylum seekers blurry, leading to little relevance of their political and legal differences. A more pro-active communication from the government is necessary, but would need to be based on more realistic ambitions of return on the side of European countries. Lastly, it is vital not only to address rhetorically why people should not leave the country but also to create reasons to stay in a more comprehensive and thus inclusive way. 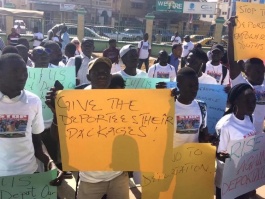