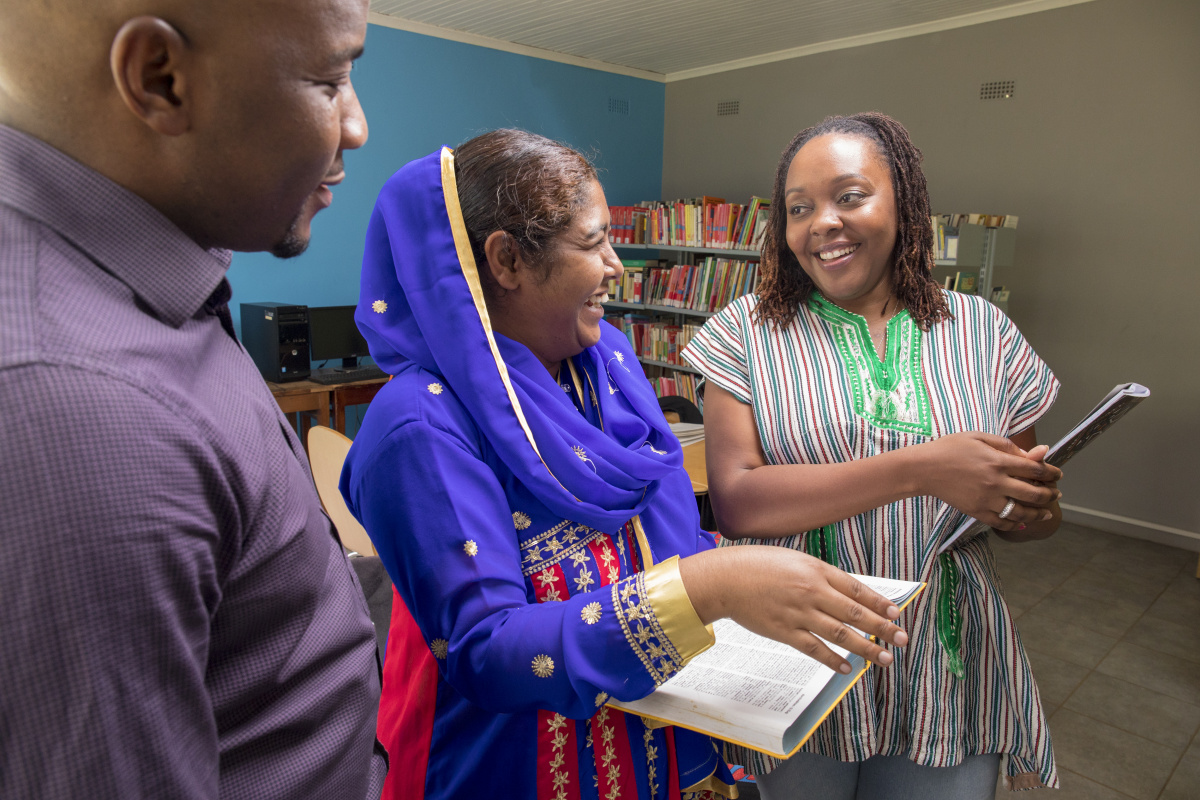 About this blog series

The ABI is one of many institutions working together with partners across regional boundaries, in the Global South and between the Global South and Global North, to undertake joint projects, and to co-produce knowledge. Yet even those partnerships that explicitly seek to challenge cross-regional inequalities exist within, and are thus themselves often structured by, the same power relations that they might seek to undermine. These inequalities can include opportunities to seek funding, control over resources, access to existing knowledge, divisions of roles and responsibilities, and academic authorship, as well as interpersonal hierarchies that run along intersecting lines of gender, race, location and citizenship, among others.

One persistent problem within this broader issue is that scholarship from the Global South is often not cited or engaged with in debates based in, or dominated by, research in the privileged Global North. This is in addition, of course, to the multiple barriers to publication that many scholars in the Global South face. This blog series aims to discuss, highlight, and engage with scholarship from the regions of Africa, Latin America, Middle East, and Asia (ALMA) that ABI staff and associates have particularly enjoyed reading. With this blog they aim to start new conversations, explore interesting themes and topics as well as highlight excellent scholarship.

The reviews are written in recognition of the (differentiated) forms of privilege that many of the contributors may hold, but with a determination to both challenge the hierarchies of academia in the Global North, and create more equal partnerships with our colleagues in the Global South.

[From the anthropologisation of law to dogmatic relapse. A review of studies on legal pluralism and the administration of justice in Peru (1964–2013)]

For several years in the Global North, there has been an interesting debate on legal pluralism, basically understood as the possibility of more than one legal system coexisting in a given geopolitical space (e.g., Griffiths, 1986; Benda-Beckmann, 2002). For their part, scholars on Latin America have also participated extensively in these discussions (Guevara Gil & Thome, 1992; Sánchez Botero, 2014; Wolkmer, 2017 among others). The explanatory power of legal pluralism has made it possible to generate interpretations that embrace not only the cultural, and in particular the legal, diversity of the societies of the Global South but also the limitations of states established under the violent foundations of the nation-state and the state monopoly on legitimate violence. The theory has had particular trajectories in each academy, but what is the trajectory of legal pluralism in the Global South, specifically in Peru? Read more.

Challenging Assumptions in Intercultural Collaborations: Perspectives from India and the UK

Ruhi Jhunjhunwala (Advisor for The Performance Theatre, UK/Norway) and Amy Walker (Associate Consultant for BOP, an international consultancy specialising in culture and the creative economy, UK)

Processes of internationalisation, globalisation and increasing global migration also present challenges and opportunities for the arts and cultural sector. According to authors Ruhi Jhunjhunwala and Amy Walker, “we now inhabit a world where people of different cultures meet and mix freely […], creating dynamic spaces for exchange and enabling the arts to […] be truly reflecting the societies […]” (p. 166). In this “new” world, managers of arts and culture – defined as intercultural brokers – have a significant role to play in directing, administering and mediating intercultural understanding. At the same time, the authors say, these brokers must challenge biased assumptions as well as power disparities, both of which repeatedly result in one-sided selections of topics and actors and imbalanced structures and processes when it comes to intercultural collaborations. Jhunjhunwala and Walker, both cultural practitioners based in the UK, though Jhunjhunwala’s experience was mainly gained when she was working in India, reflect and conduct research in their field of activity, analysing international “partnerships” in the arts between the so-called Global North and Global South. They use the example of India-UK collaborative art productions and programmes that they themselves work in and for. Read more.

Frontiers of Ethnic Brutality in an African City: Explaining the Spread and Recurrence of Violent Conflict in Jos, Nigeria

Available at: https://journals.sub.uni-hamburg.de/giga/afsp/article/view/1133/1140.html(link is external)

The article by Madueke and Vermeulen analyses the violence and ethno-religious riots that took place in the city of Jos, Nigeria during the period 2001–2010. The authors catalogue hostilities and atrocities that occurred during this time. They argue that whilst indigenous rights and political representation are considered as the primary factors behind the violence, the ethnic divide can be seen as erupting along religious lines, namely between the Muslim and Christian communities/ethnicities. Religion is considered as offering a “wider base for mobilising political support” (p. 39). Additionally, the authors refer to other factors with effects beyond the superficial religious divide that explain violence among local criminals, ethno-political activists, party loyalists, vigilantes, etc. (p. 39). The introduction situates the article in the discourse of demography and ethnic violence, more specifically between literatures arguing that violence increases in mixed demographic settlements vs. literatures positing that segregated demographic settlements result in “deepening sectarian animosity” (p. 40). Read more.

The Refugees’ Right to the Center of the City and Spatial Justice: Gentrification vs Commoning Practices in Tarlabaşı-Istanbul

Published in 2020 in Urban Planning

Istanbul has been experiencing a redevelopment frenzy since the early 2000s. Most of these projects of urban renewal and regeneration first targeted run-down old neighbourhoods that had experienced an increase in their potential land value. Tarlabaşı is one of these historical neighbourhoods located in Beyoglu district, Istanbul. The paper “The Refugees’ Right to the Center of the City and Spatial Justice: Gentrification vs Commoning Practices in Tarlabaşı-Istanbul”, written by Charalampos Tsavdaroglou, looks at this neighbourhood in particular: by the 2000s, Tarlabaşı had become a neighbourhood populated by the most disadvantaged segments of the population, including Kurdish people from the southeast, Roma, foreign immigrants and refugees, as well as a transsexual community. Under Law 5366 enacted in 2005, which enables regeneration in historic areas, nine lots in Tarlabaşı were declared as “urban renewal” areas in 2006, with the intention to convert the buildings into hotels, shopping spaces and residences. This initial stimulus was expected to trigger a complete physical change and gentrification of the area. In 2007, Gap Insaat (a construction company) won the tender to prepare a project for the area. Read more.

The new Brazilian conservatism: from Reagan to Bolsonaro

Marina Basso Lacerda; Post-doctoral researcher at the Center for the Study of Citizenship Rights (Cenedic), University of São Paulo (USP)

The recent political rise of the far right in Brazil and the election of Jair Bolsonaro as president in 2018 has mobilised researchers from different areas of the social sciences to understand these phenomena. Why now, decades after the 1988 Constitution – which sought the formation of a Democratic State under the rule of law and the implementation of social welfare policies – and, more recently, after governments led by the Workers’ Party – which sought to overcome social inequality by implementing redistributive policies – has a force that expresses an antagonistic stance obtained an electoral majority and come to govern the country? The excellent book “O novo conservadorismo brasileiro: de Reagan a Bolsonaro” (The new Brazilian conservatism: from Reagan to Bolsonaro), written by the researcher Marina Basso Lacerda, points out some ways to answer this question. Read more.

Published in 2020 in Chinese Sociological Review

Over the last three decades, the steadily increasing enrolment of incoming international students has contributed immensely to the economies of the receiving countries, which are first and foremost English-speaking countries in the Global North. Unfortunately, earlier this year the global spread of the SARS-CoV-2 pandemic put a spanner in the works of this business model. Border closures, internal movement restrictions, social distancing and mandated confinement have severely impacted international students, for whom mobility is essential. How have universities mitigated their huge losses in revenues while balancing the interests of the international students enrolled in those institutions? Read more.

Rather than reviewing one academic piece for the ALMA Reviews Blog, in this post I wish to draw attention to the value of university dissertations written by African students at African universities. I propose that engaging with such underused literature offers scholars access to precious local perspectives while also supporting African students by helping them to develop their international visibility. Read more.

Published in 2019 in The Right to Nature: Social Movements, Environmental Justice and Neoliberal Natures

Available at: https://www.routledge.com/The-Right-to-Nature-Social-Movements-Environmental-Justice-and-Neoliberal/Apostolopoulou-Cortes-Vazquez/p/book/9781138385375(link is external)

Noura Wahby’s chapter on “Egyptian environmentalism and urban grassroots mobilization” provides an exciting discussion of the fragmented environmental scene in Egypt and the Egyptian state’s role in this. All those interested in a counter-hegemonic re-thinking of environmental politics will find the edited volume, which this chapter is a part of, of immense value. In her chapter, Wahby argues that “localized grassroots forms of contention against state damage and negligence in Egypt are undermined by a particular definition of nature put forth by the new bourgeois classes and co-opted civil society movements”. Read more.

At first glance, Mariana Mora’s book may seem to be a conventional anthropological study of a highly popular movement: the Zapatista movement in Chiapas, Southern Mexico. From 1994 onwards this movement, as an example of indigenous organising practices and their success in pressing for autonomy, has been the object of much anthropological enquiry. The Zapatista uprising occupied several towns in 1994 and later established autonomous municipalities with their own education and health services. Mora’s book differs from most, however, because of her decolonial and historicised approach. Read more.

Published in 2019 by Rowman & Littlefield

In her recent book “Deviant Destinations: Zimbabwe and North to South Migration,” Rose Jaji, senior lecturer in Sociology at Harare University, pays attention to an unusual type of migration journey. Unusual not necessarily in the frequency it occurs, but regarding the attention received in academic studies: she analyses journeys from the Global North to Zimbabwe, a country which has experienced “political violence, poverty, suffering and despondency” (p.60) in the last two decades. Zimbabwe has long become an archetype of a country from where people emigrate. To illustrate, Crush and Tevera note that “given the ruinous state of the country’s economy, it remains a puzzle as to who, why, and indeed how, anyone could stay” (p.2) in their edited volume aptly named “Zimbabwe’s Exodus.” Rose Jaji`s book gives an entirely new reading of Zimbabwe, showing how studying migration from the Global North to the Global South can give new insights into the common elements of migration motivations, the place of migrants in a host society and the pitfalls of a containerized understanding of the nation-state. She interviewed 35 people between 2015 and 2017 – most from Germany and the US – moving to Zimbabwe both in the pre-crisis period (1980-1996) and in the crisis period (1997-present). The group includes expats, spouses of expats and Zimbabweans as well as missionaries who live in Harare and a rural field hospital (see Introduction). Read more.

In this excellent and thought-provoking article, Rana Barakat interrogates the application of a settler colonial framework to understand Palestinian history. Settler colonialism is a form of colonialism that - as a structure, not an event - seeks to disavow the presence of indigenous ‘others,’ and to “ultimately supersede the conditions of its operation” through (a combination of) the erasure, expulsion, elimination, and assimilation of the native population (Veracini, 2011:3). Bringing an insistence that scholarship is, and must be, part of a broader political project, she asks “how can a settler-colonial analysis be part of a deeply political scholarly mode of indigenous resistance in Palestine?” (p.350) In this piece, Barakat argues that, the “writing/righting” of Palestinian narratives demands that an analysis and understanding of settler colonialism must be embedded within an indigenous framework. Read more.