The ABI team consists of the Director, the Executive Director, research assistants and research supporting staff. The latter provide support in the library, in the editorial team of the International Quarterly for Asian Studies, in public relations and in accounting.

In addition to the employed staff of the ABI, there is a close cooperation with the associated staff.

Furthermore, we provide the ALMA Fellows, an interdisciplinary group of PhD students and postdocs, with an infrastructure for their research. In the spirit of the ALMA concept, they deal empirically and comparatively with socially significant phenomena in regions and societies outside Europe.

In its Human Resources policy, the Institute takes particular consideration of gender and diversity dimensions. 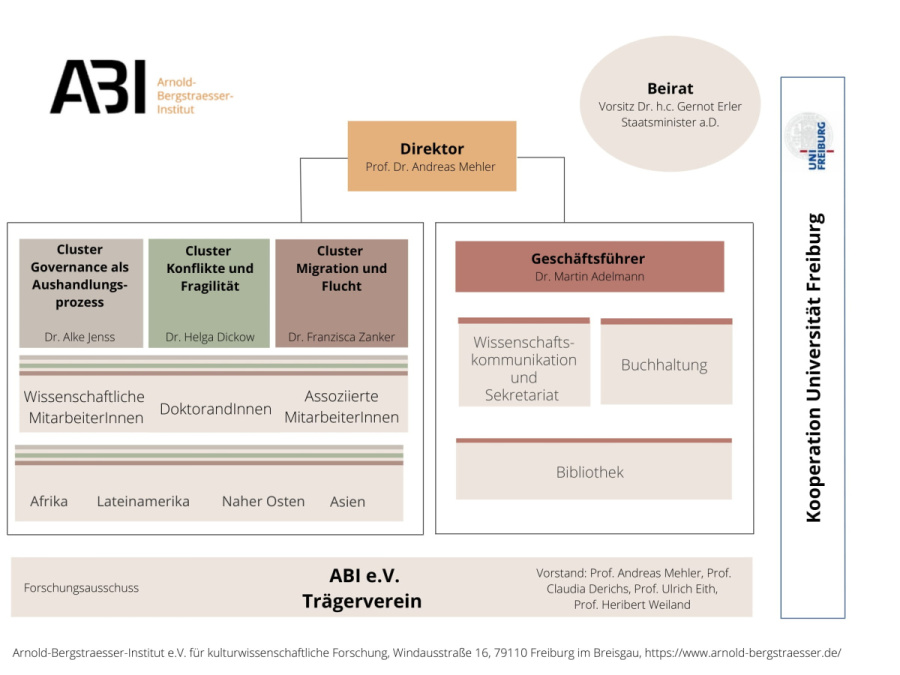 The institute‘s research focuses on questions of power transformations, state institutions and societal conflicts in Africa, Asia, Latin America and the Middle East. The current research falls into three clusters:

The institute is distinguished by its comparative and interdisciplinary approach and its mix of methods. Field research, in-depth regional expertise, and region-specific contexts are central.

As a research institute based in the Global North that has been conducting research on developments in the Global South for over 60 years, addressing the consequences of violent and racist colonialism and subsequent global inequalities plays a central role in our work. We are not only concerned with the scientific topics of our work, but also especially with the reduction of global knowledge asymmetries.

The ABI Library specializes in political, social and cultural change in Africa, Asia, Latin America and the Middle East. With a collection of 85,000 monographs and 120 journals, it is one of the largest collections in the field of development and regional research in Germany. The library's catalog is available online.

In addition to office and conference rooms, the building, which is owned by the ABI e.V., also offers rooms for visiting scholars. The institute receives its basic funding from the state of Baden-Württemberg. Additional third-party funding is obtained from scientific institutions and international cooperation organizations.